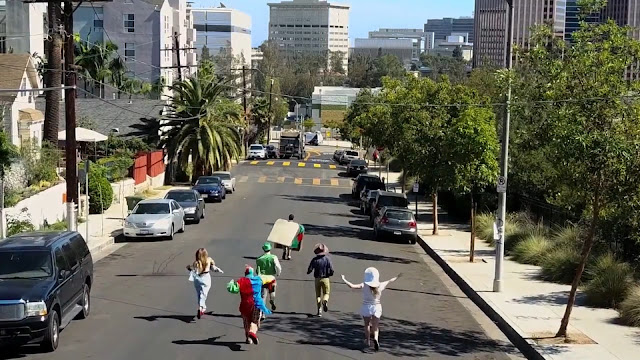 Well, I didn’t know it was possible. “What’s that?” you ask? Well, for me to like pop-punk. BUT! Being a huge fan of sandwiches and a consummate connoisseur of musical comedy, it just sort of hit me like… like a giant, um, pickle! The song that is. Okay, let me explain. A couple weeks ago (Friday Nov. 3rd) was National Sandwich Day and being an aficionado of seid finger food, I decided to look around Santa Cruz for a decent shop to sample. What I found was not just great eats but serendipity! After munching down a masterpiece wedge entitled “The Claw” at Surf City Sandwich in Santa Cruz (man there’s an inordinate amount of alliteration in this review) I unintentionally overheard a curious “poppy” tune emanating from one of my fellow patrons phones. I glanced over only to see a young man in a sandwich suit walking around LA on her screen while the music played.
“What’s that?” I asked.
“Mind your own damn beeswax!” she snapped.
So, I decided to research myself. After a few mins of googling ‘sandwich man’ and ‘pop punk’, thanks to superlative SEO, some seriously silly, sonic satisfaction was served with the band WE TRiED’s heroic homage to the hero, or maybe hoggie.
Normally I could care less about a teenie-bop, bubble gum jam (as my mother would call it), however this one was different. They didn’t seem to be taking themselves too seriously. Like a sleepaway camp horror movie - it’s only good if it’s..well…campy. You can’t help but feel for the poor guy (lead singer and guitarist Paris Dylan) who just wants to be accepted for what he really is deep down: a hero...sandwich. Upbeat crunchy major chords, and catchy licks round out the sonic profile of the lead guitar. The drummer and bassist are on point with flurries of fast fills and Blink182-like quick changes. The whole vibe is that of a pool party at Jim Adkins house circa 1998. Nostalgic, funny, fun! Despite my previous disposition regarding Pop Punk in the past, I’m gonna go ahead and recommend checking this track and there debut album entitled: “Self-Titled” ASAP! AND, you’re in luck because it’s being released today November 21st, 2017 and you can buy it on iTunes and Google Play and stream it on Spotify. In the meantime, here’s a link to their hilarious music video “Come Around”. Enjoy, like, comment, subscribe and share!